The Battle of Vimiero Hill

The Battle of Vimiero Hill 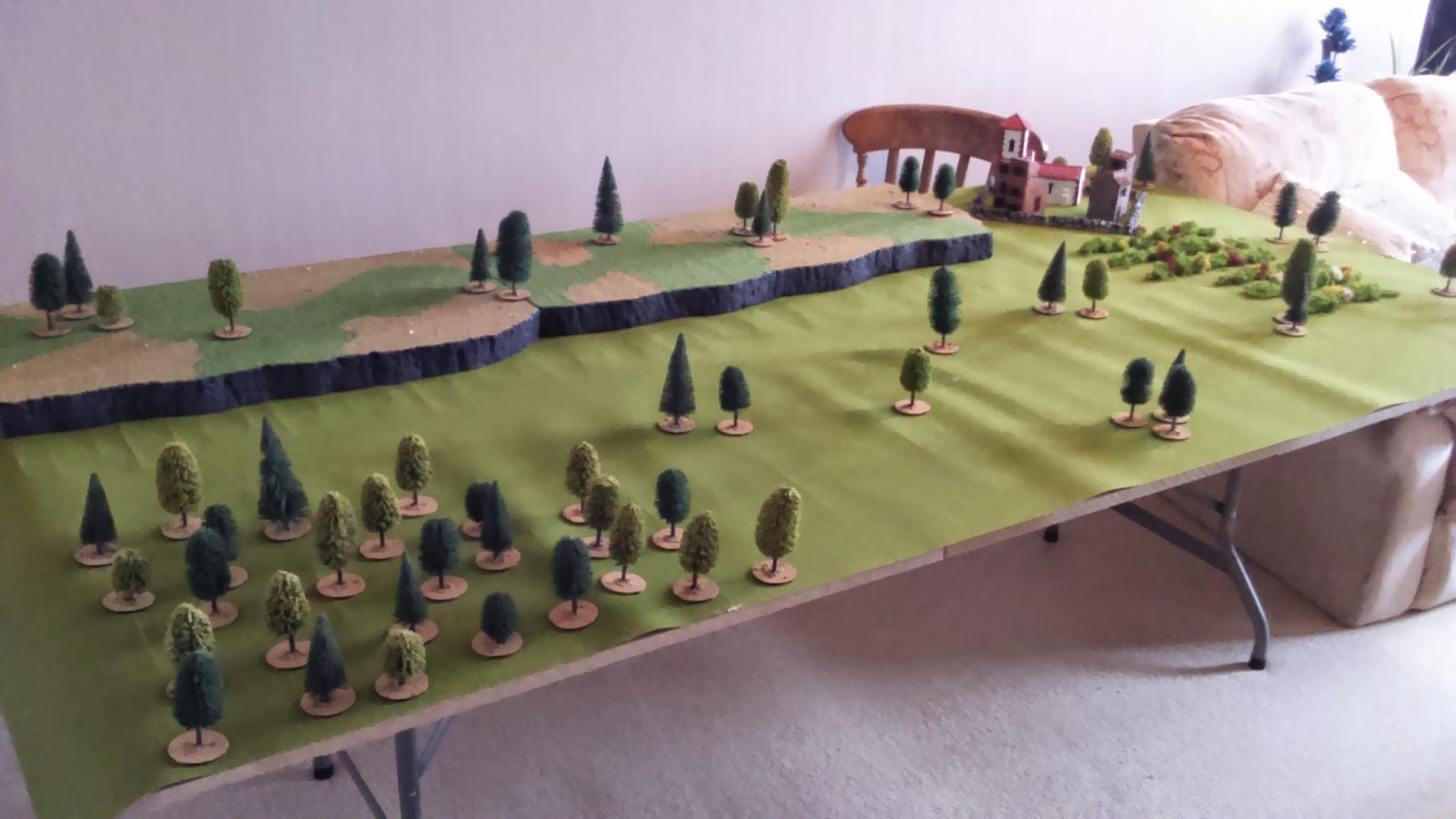 After our last battle of Rolica where my centrally deployed cannon caused the British no end of problems - I fully expect Adam to deploy his artillery in a similar position in the middle of vimiero hill. If I were Adam I would certainly deploy a battalion in the village to anchor the British left flank and I'd deploy a nice long thin red line along the crest of vimiero hill with my skirmishers pushed out to cover my lines.

To my mind the village on the British left flank and the fact reinforcements will arrive there on turn 5 makes the left flank a daunting prospect for an attack. Similarly, I don't relish the thought of attacking the centre under cannister fire if that is where Adam places his cannon, therefore my plan is to heavily weight my attack on my left against the British right, whilst pinning the rest of the British line to prevent Adam reinforcing his right.

Kellermans elite combined grenadiers in open order will cover the advance and deployment of my artillery in the centre with the unenviable task of facing the British cannon if that is where Adam deploys them and St clair's veteran grenadiers will deploy on the right in open order formation and advance to hold the vineyards on the right.

Adam deployed Fane's Brigade on his right flank with the 95th Rifles in line on the end of the British flank with the 50th Regiment next to them, skirmishers in front and the 5th battalion 60th Regiment behind in reserve. In the centre of his line went his 9 pounder cannon with Anstruther's Brigade to the left in line with one battalion in the village, two in line on the hill and one behind in reserve. 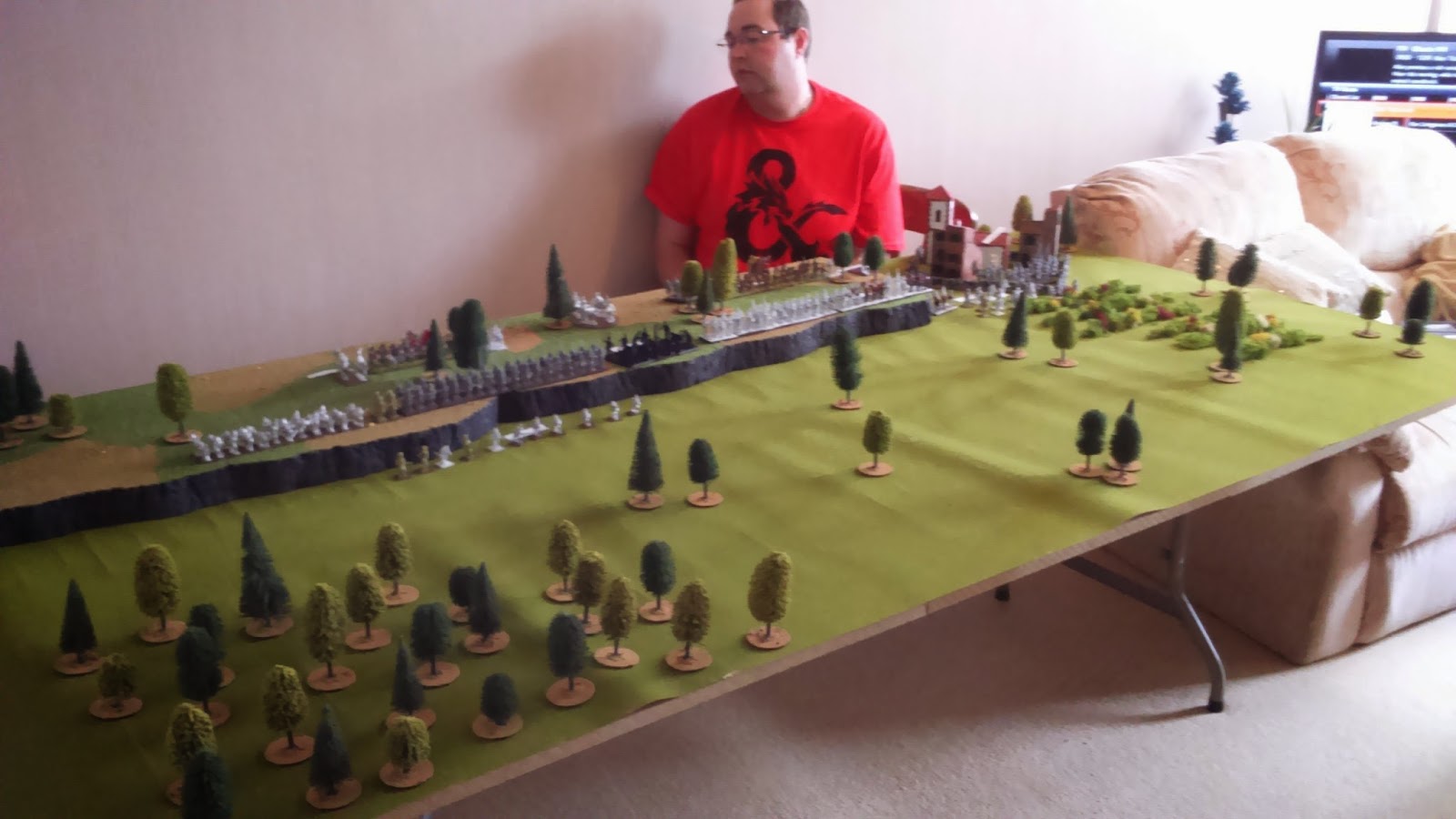 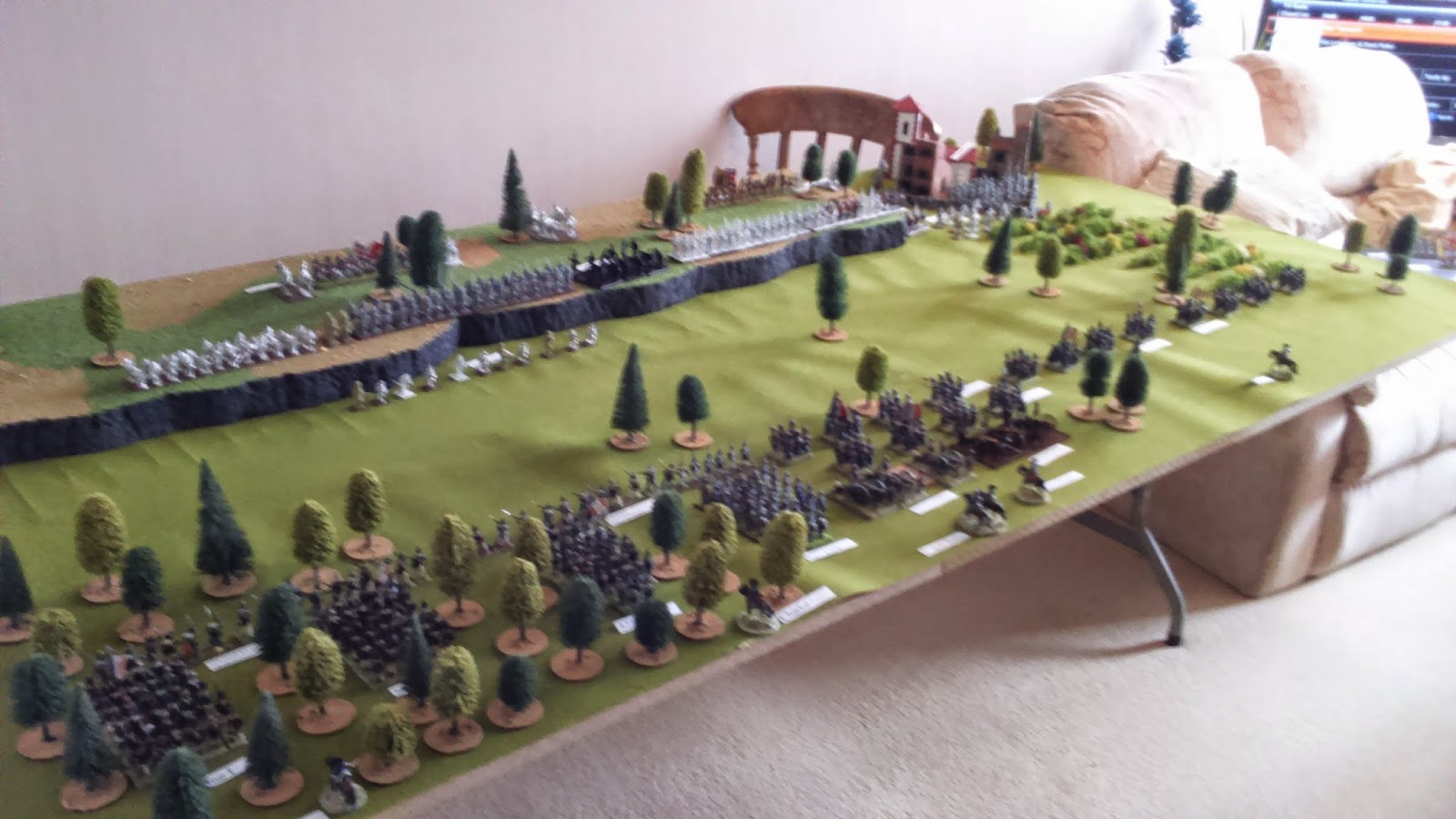 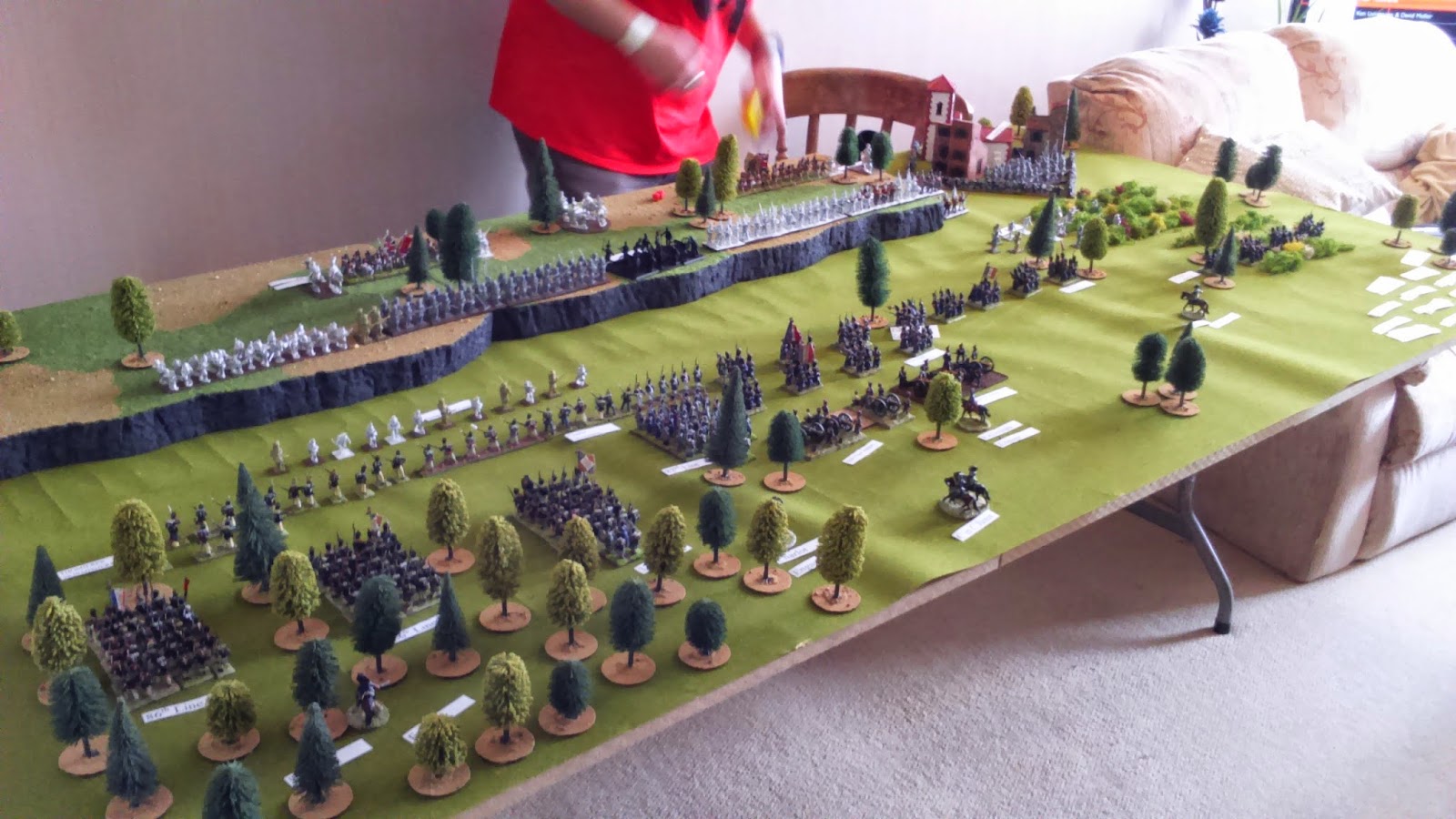 Turn 2: The British seized the initiative with Anstruther's skirmishers moving up towards the vineyards and the approaching St clair's grenadiers.

The French left began to emerge from the woods whilst Thomieres and charlot's skirmishers pressed close to the 95th Rifles and 50th Regiment. In the centre Kellermans grenadiers advanced undaunted towards the British cannon, the French cannon limbered behind them advancing quickly whilst st clair's grenadiers moved into the vineyards.

British cannister proved ineffective causing only 1 casualty on grenadiers I as did the fire of the 52nd.

In return the French skirmishers could only cause 1 casualty on the 95th. 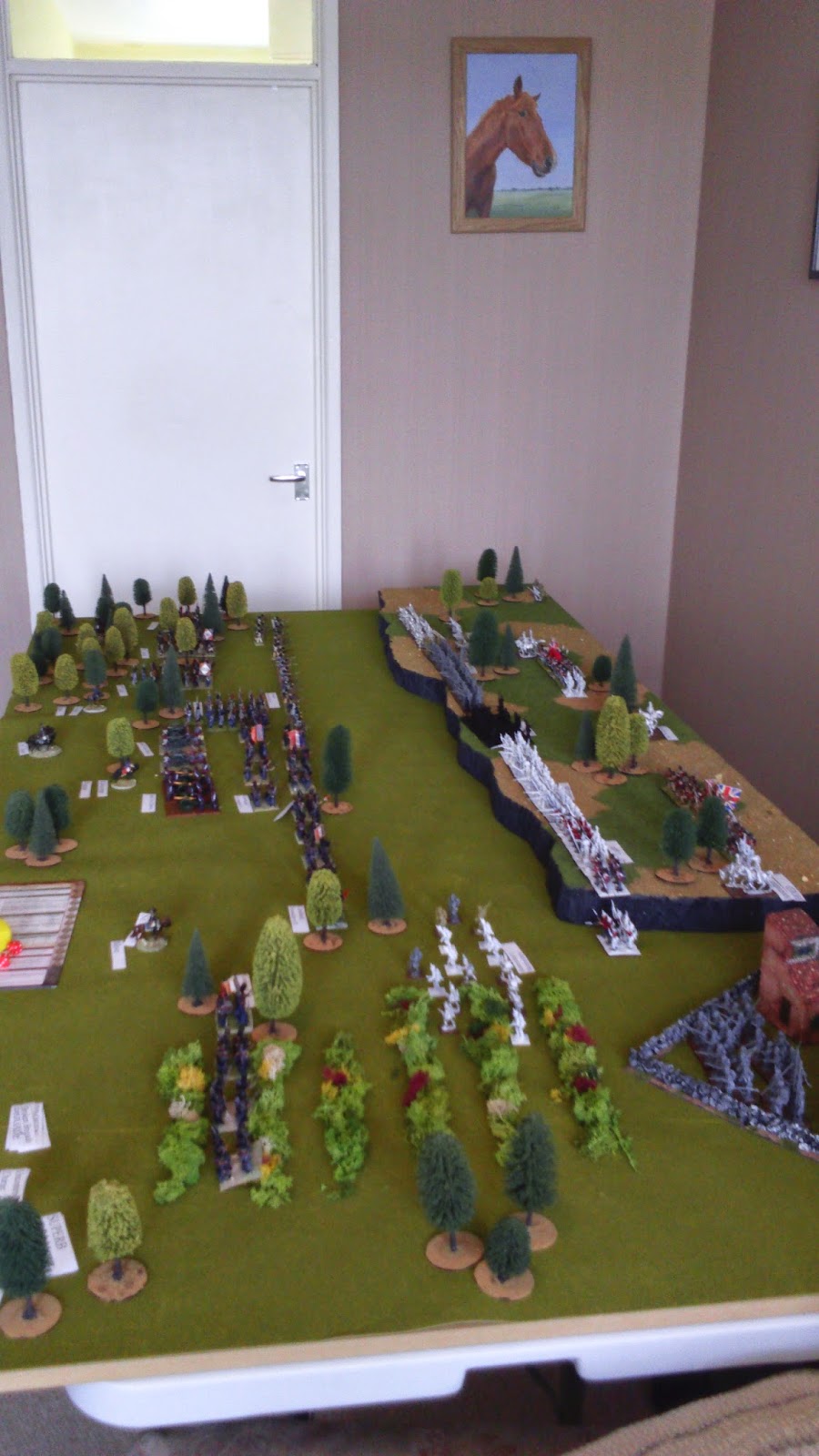 The British retained the initiative and after much indecision I decided to charge the grenadiers I at the British cannon. After what happened to British troops charging French cannon at rolica I was sure this was a bad move but it looked more appealing than standing in front of the cannons engaging them with musketry!

The British defensive fire was desultory as the French Grenadiers boldly marched up the hill and with a cry of vive le emperour! Charged home causing the British cannon crew to rout!? (Adam rolled a double 1 for defensive cannister fire and another double 1 in the combat!?) No more British cannon to worry about!

Adam immediately started to bring up his reserve to plug the gap in the centre of his line whilst the British left opened up on the advancing grenadiers the 43rd causing a massive 3 casualties vs grenadiers III and on the French left the 50th Regiment caused 2 casualties on charlot's skirmishers.

The French reply was meek save for Thomieres skirmishers whom amazingly managed another double 6 vs the 95th Rifles whom faltered as a result!?

The French stole a march and Grenadiers I positioned themselves on the flank of the 50th whilst French units on the left shook themselves out into line whilst columns continued to advance. St clair's grenadiers went over to hold orders as they'd reached their position. The French cannon unlimbered....

The British line was reforming to plug the gap in the centre.

The British regained the initiative and Acland's Brigade arrived on the far right of the hill next to the village and promptly set off for the British right flank!

On the French left the line regiments were nearing the British flank in mixed order whilst the centre were trying to reorganise against the threat of British reserves aswell as make room for the cannon to open up. On the right the Grenadiers IV stood in the vineyards doing nothing but stopping the battalion in the village redeploying!

Thomieres skirmishers rolled another double six against the 95th Rifles!? But this time the greenjackets held their nerve! Charlot's skirmishers caused 1 casualty vs 50th regiment, grenadiers I caused 1 vs 5th/60th and Grenadiers II 1 vs 52nd. 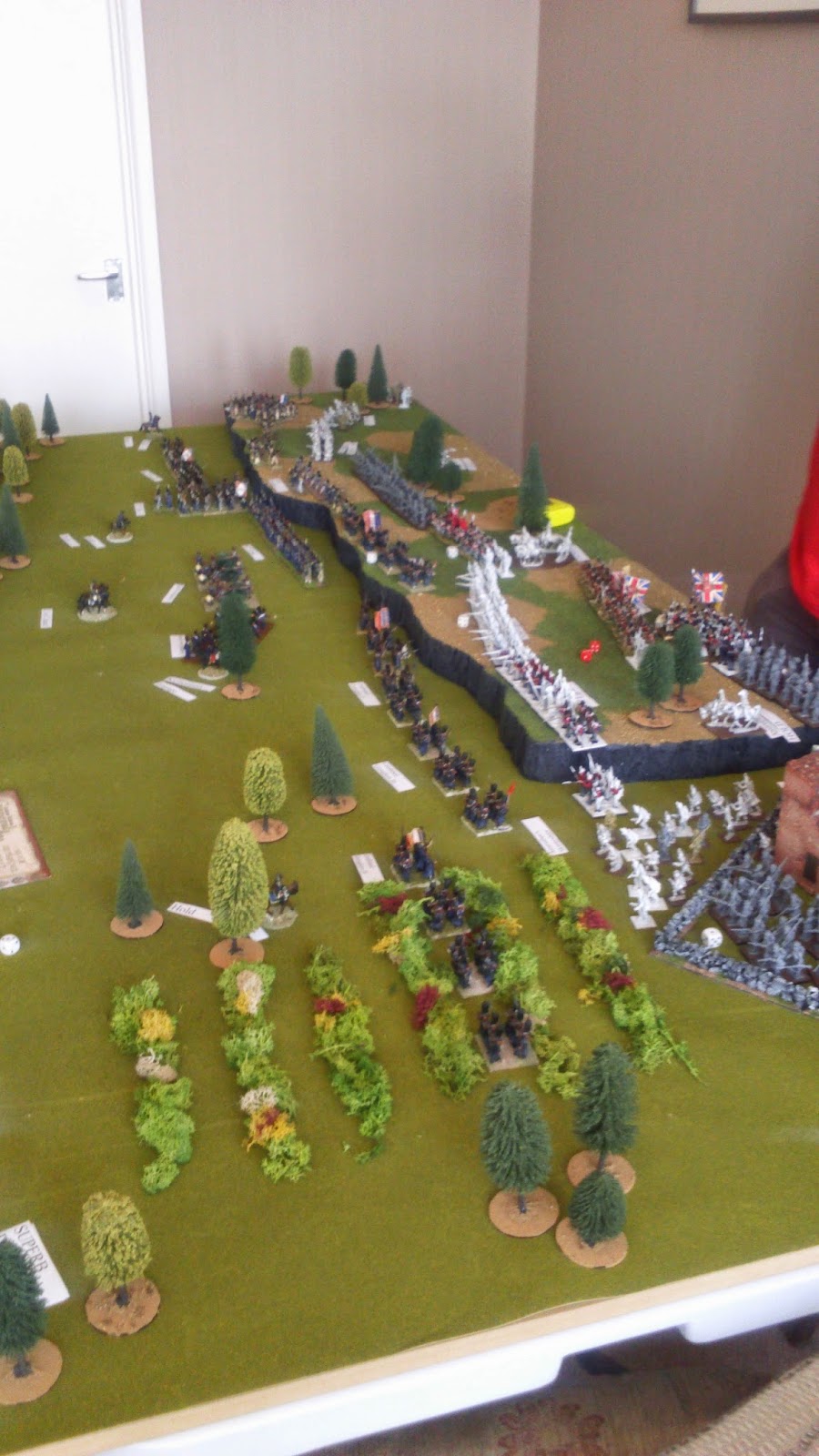 The British maintained the initiative with Acland's Brigade continuing to rush to the British right flank.

The French left finally get their line units into effective musket range of the British right whilst Kellermans grenadiers in the centre move as best they can to stay engaged but make space for the cannons.

The British retained the initiative. However, the French 86th line in column formation charge the much depleted 95th Rifles but the expert marksmen level their Baker Rifles and caused 4 casualties against the densely packed French column causing it to falter! (another double 6!?)

Noticing Kellermans grenadiers becoming swamped in the centre Junot orders his Brigade to retire to the right of the French cannon.
Acland's Brigade continues its dash to the British right, whilst his skirmishers go into action in the vineyards against grenadiers IV killing 2. Acland's skirmishers cause 1 casualty on grenadiers III but the British line infantrys fire is ineffective.

In contrast the French fire on the left is devastating with columns and lines causing 3 casualties on the 95th Rifles and 4 on the 50th Regiment. The British right disintegrates as the 50th Regiment routs from the battlefield but the stubborn 95th only falters.

Turn 8: The British maintain the initiative but the French 86th line charges the 95th Rifles routing and destroying them.

Kellermans grenadiers finally move out of the way of the French 8 pounders in the centre but are still blocking the 4 pounders. The 5th/60th kill a gunner of the 8 pounders and Anstruther's skirmishers kill another from grenadiers IV.

The rest of the French left move up towards the British centre.

The British refuse to give up the initiative and Acland's order is changed to hold.

St clair's Brigade is ordered to retire as it is becoming seriously weakened.

The 20th regiment forms line creating a new bulwark to the French advance.

Kellermans Brigade finally clears the front for the French cannon whilst charlot's skirmishers retreat behind the cannon so they can open up with cannister.
The French left advances towards the British centre.

The French cannon fire is ineffective causing only 2 casualties against the 5th/60th.

The 82nd line causes 3 casualties on the 20th but their morale holds! 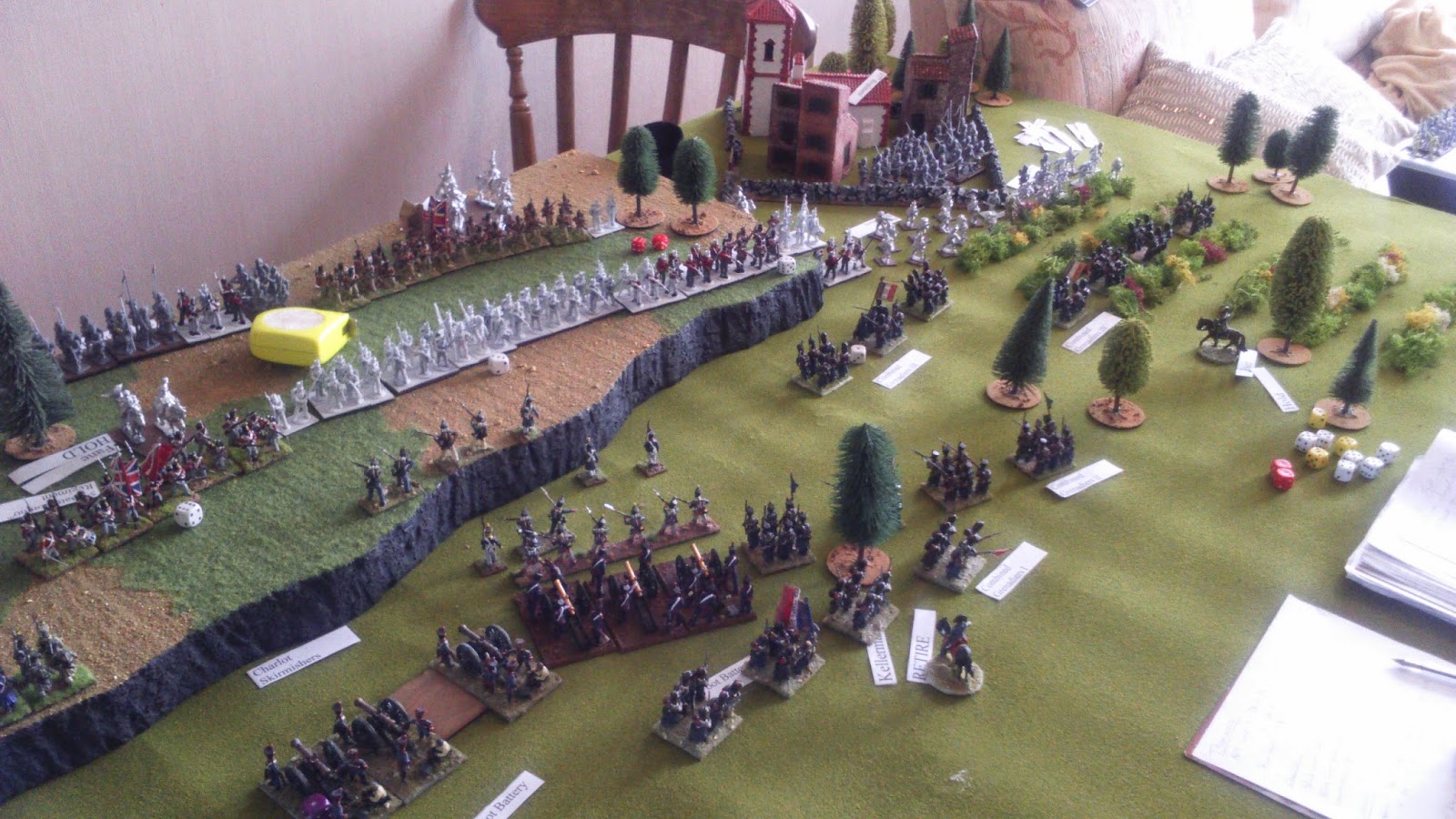 The British hold the initiative with a double six!

The British attempt to move their line away from French cannister range whilst the French left closes in on the 20th Regiment.

The 20th regiment in line delivers a devastating volley into the 32nd line causing 4 casualties. A 4 pounder gunner is also cut down.

The French cannon begin to find their mark causing 3 casualties on the 20th and 4 on the 52nd! But it is the turn of the French infantry on the left to miss with their fire!

All units pass their morale!

Time is starting to run out for the French! Having retired his grenadier brigades Junot can only have 4 close order infantry battalions on the hill whilst the British still have 6 battalions!

At last the French seize the initiative! But with the 20th Regiment holding firm the French left can only shuffle forward whilst the British skillfully manoeuvre out of cannister range.
Firing shot the cannon cause only 1 casualty on the 20th and 5th/60th. Chalcots skirmishers cause 2 vs 43rd. The 82nd line and 86th I 3 vs the 20th but the 20th refuse to budge!

The last stand! To win the French need to destroy 3 British battalions!? The British Seized the initiative but before they can do anything the French 86th Line charges the British 20th Regiment! The British fire misses and.The French column smashes into the thin red line routing the British! The remainder of the French forces pour fire into the 5th/60th whom in return cause 3 casualties on the 82nd but they lose 5 to the massed French fire! Both the French 82nd and the British 5th/60th are on morale checks! If the British hold they win the game if they rout the British could still win if the 82nd rout! The 5th/60th fail their morale and rout from the battlefield! The 82nd dig in their heels and hold their ground! Both the British and French have 4 battalions on the hill the game is a draw! 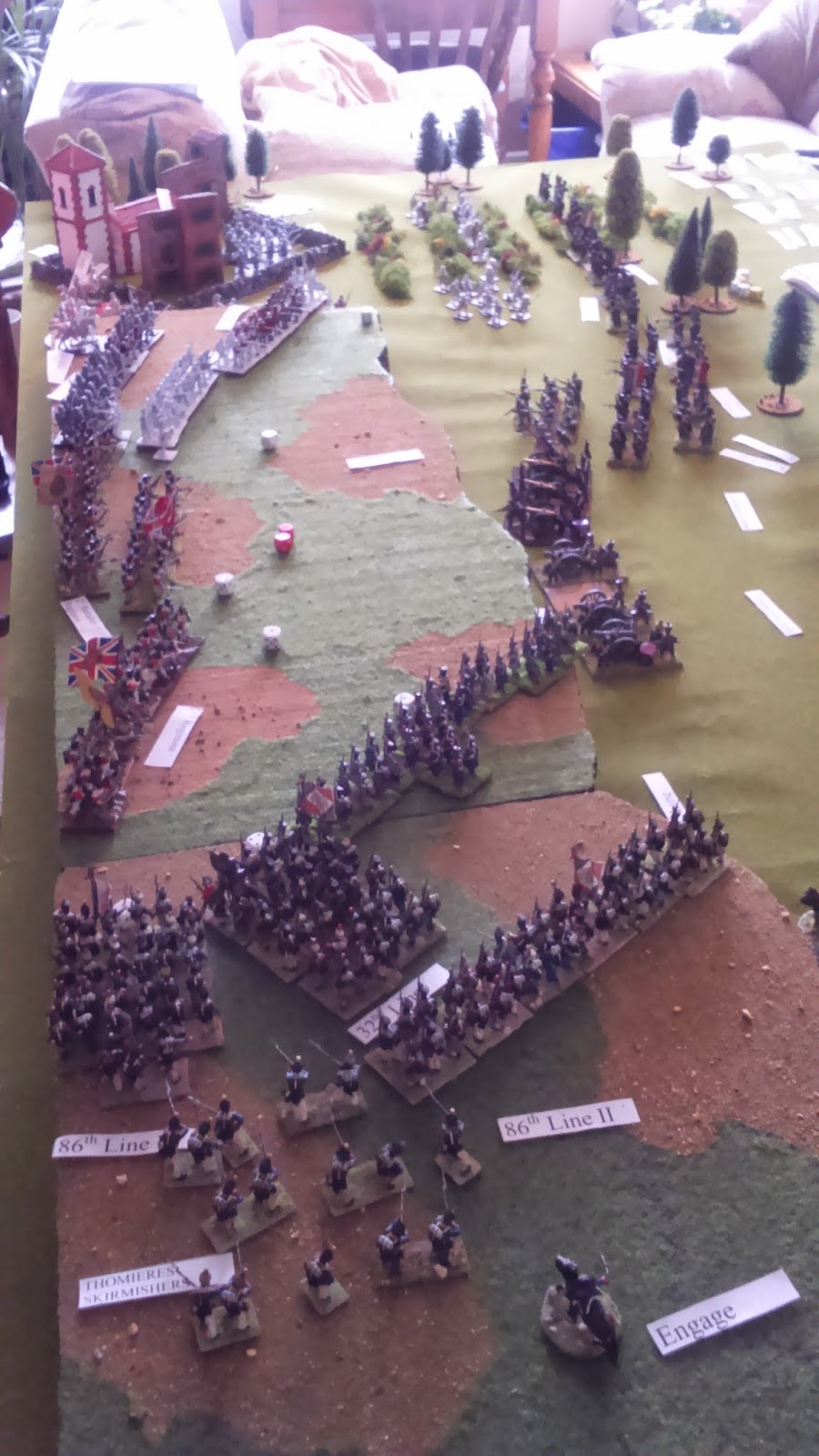 Well that was a close one! I only just managed to scrape a draw in the very last turn! I have to admit it feels a bit strange as after the British cannon had been routed so quickly I always felt like I had the upper hand and my attack was progressing very well!

I think my plan was spot on but I did muddle it's implementation getting fouled up with the deployment of my units on the left and it took far too long to get my cannon into action.

However, I do think I had the upper hand in the battle and if it had continued with my cannon intact and the left brigades in good strength I think I would have gone on to win. I certainly did better than in the original battle and caused the British alot of casualties without losing a single battalion. But Adam still had alot of units in good strength so I'm sure he'd have something to say about that!

At the end of the day it doesn't matter whom wins or loses the payoff is the battle itself and it was a great game!

Adam did extremely well after the early loss of his cannon and he proved what can be done with infantry alone and nearly won the battle! I'm not sure he could have done much more!

From my point of view I think it was the right decision to retire the grenadier brigades as they were seriously mauled and I might have lost them if I'd thrown them onto the hill in an effort to win the game.

In the end I was two turns at least behind where I needed to be which is down to my messed up manoeuvring on the left and centre but all in all I'm chuffed with the plan and my attack was working and it was a great days gaming!

On a final note how good were Thomieres skirmishers!? If they ever grace the battlefield again I'm going to lobby for them to be graded as elite chosen men! :-)

Posted by Robert Reynolds at 12:03